For some things there is no rational explanation. Welcome ... to Oblivion.

Riders dangle over the edge of Oblivion's vertical drop

Set at the site of a sinister secret Government facility, Oblivion hangs riders over the top of a vertical drop before they plunge 180 ft down into a tunnel below.

The ride is the first B&M Dive Coaster in the world, and was widely well received on its opening in 1998. It remains one of the favourite rides at Alton Towers today, but thanks to its large capacity it often has a shorter queue than many of the other rides at the park.

Ride cars are very different from normal rollercoaster cars. They have two rows with eight riders per row, the outside four seats in each row hanging over the side of the track. The back row is elevated a little higher than the front, meaning all riders have a good view over the edge of the vertical drop.

Riders begin their experience by following the queueline which circles up and around a large concrete building, eventually emerging into the station near the top. After boarding the ride, the cars make their way slowly up the lift hill. From there, riders get a superb view over the Staffordshire countryside as the ride makes a slow left hand turn and approaches the main vertical drop.

The ride car starts to tip over the edge, before coming to an agonising halt with riders left dangling in mid-air. At this point their used to be a loud voice: "Dont ... look ... down ..." but this has been removed in recent years following noise complaints. Instead, riders see the words spelt out in large letters painted on the ground that they facing straight down onto.

Seemingly without warning the brake holding the car in place is released, and the ride begins hurtling straight downwards towards a mist shrouded hole in the ground that looks impossibly small to fit through. Amazingly the gap is just wide enough, and with the car now travelling at full speed, the track begins to level out and riders emerge back into the open air. The cars execute a large banked turn around Enterprise, then travel upwards to hit the final brake run.

Oblivion has a very simple layout and the only real element to the ride is the vertical drop. More recent versions of B&M Dive Coasters have more interesting track layouts, multiple elements, floorless cars, etc., etc., but the simplicity and style of Oblivion is hard to beat. It's a one trick pony for sure, but what an adrenaline filled trick! 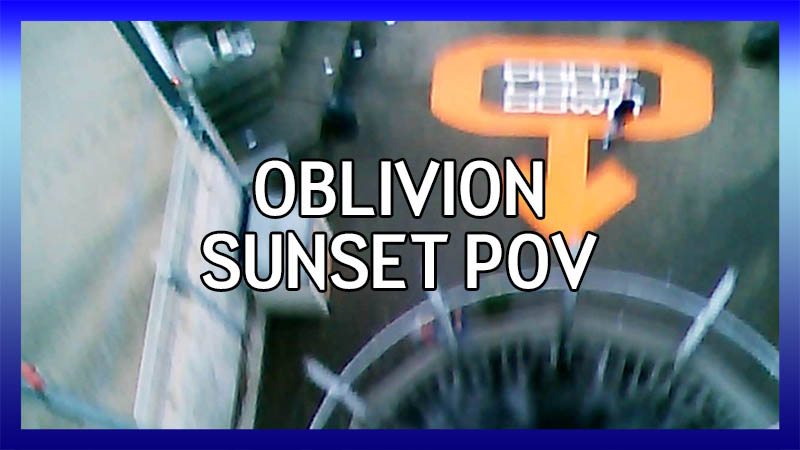