Wicker Man, codenamed SW8 (Secret Weapon 8) is Alton Towers' new wooden rollercoaster, built on the old log flume site and due to open for the 2018 season.

Wicker Man will be the park's first wooden rollercoaster when it opens at Alton Towers in 2018, and is being manufactured by Great Coasters International (GCI). As is common with Alton Towers' rollercoasters, it was given the codename Secret Weapon 8 - SW8 for short - during construction.

From early on, rumours suggested the ride would have a Wicker Man theme, and rollercoaster's track would pass through large Wicker Man statue. The name Wicker Man was officially confirmed at midnight on 8 January 2018.

Planning for the ride began in 2014, with several areas of the park considered as possible sites. Early on, the rollercoaster was due to be part of Forbidden Valley, built on the car parks near to Air. By March 2015, a location on the site of The Blade was being considered, with the track reaching over to part of the old Nemesis extended queueline. However, ultimately The Flume site was chosen after it was decided that the log flume had reached the end of its serviceable life.

Several options for rollercoasters were considered and passed through focus groups, before the teams at Merlin and Alton Towers settled on a wooden rollercoaster. Proposals from manufacturers such as The Gravity Group (Cú Chulainn, Tayto Park) were evaluated before settling on the design from Great Coasters International (Wodan, Europa Park).

Much of Wicker Man's construction took place during the 2017 season, so visitors to the park were able to watch progress as the wood rose into the sky. The Welcoming: Be Chosen was a new scare maze at 2017's Scarefest event, which hinted at Wicker Man's theme and acted as a prequel to the ride itself.

The first train was successfully sent around the track in December 2017.

Alton Towers' fireworks weekend provided the final opportunity before the closed season to take a look through the fences at the SW8 construction site.

The Katanga Canyon pathway was open for the entire weekend, but the real treat for rollercoaster enthusiasts was after the fireworks shows each evening when the service road was opened up, giving us all our first chance to walk underneath the Secret Weapon 8 lift hill and really get up close with the new wooden coaster.

Aerial view over The Welcoming: Be Chosen scare maze from the Sky Ride

View of SW8 from the Sky Ride

Inside the maintenance shed

Underneath the lift hill

The wood: close up

A nighttime view over SW8

Crowds walking along the service road

Between the lift and the airtime hill

Bottom of the first drop passing underneath the lift hill

Wood ready to go into place

The kiosk building wrapped up against the chilly night air

Bottom of the first drop

Track bed built up ready for the steel running rails

The Katanga Canyon path is now being opened from around 4:30pm for the rest of Scarefest, offering a new set of views across the site and the first opportunities to get up close to SW8's maintenance buildings. The path is also expected to be open next weekend during the evenings of the Fireworks event.

A view down the site

Airtime hill, with supports in place for the sound tunnel

Looking through the airtime hill

Pathway past the kiosk building

Layers of lamination being built up for the track bed

The queueline will go underneath the rollercoaster

Around 95% of the paths are now in place

Queueline fencing being put into place

Track passing through the theming element

The theming element under cover ... could this be the Wicker Man?

A glimpse under the covers

What is this spike?

The lift hill, featuring the bent bit near the bottom of the picture

Track bed being built up

The track runs through the legs of the ... wicker man?

The track leaving the maintenance building

The track leaving the maintenance building

Track emerging from the maintenance building

A view between the legs of the giant theming structure

The Katanga Canyon path passes beside the maintenance building

Up close with the maintenance building

Path going underneath the lift hill and first drop

Path underneath the lift hill

Top of the lift hill transitioning into the first drop

Banking on the first drop

A view from the Rapids

Remains of old paving from the days of The Flume

The moon rises over Secret Weapon 8

Lots of builders on site today, spread across the site working on various parts of the track. New signs have been put up around the boundary fences, revealing the SW8 logo which looks like a burning man. Could this be another clue to the true purpose of the large theming element, now shielded from view underneath hessian sack material?

The queueline paths and fences are progressing next to the bottom turn around, which follows the circle footprint of The Flume's old station. In an early version of the plans for SW8 there was to be a restaurant in the middle, although this was ultimately not progressed.

Elsewhere on the park Scarefest has begun, featuring The Welcoming: Be Chosen scare maze which acts as a preview to the backstory of SW8. The maze features a group of woodland dwellers who shy away from modern technology. The group have invited outsiders to participate in a strange ritual, with the opportunity to "be chosen" ... whether or not that is something good or bad is only revealed to those brave enough to enter the maze and find out for themselves.

The bottom of the site, with track visible entering the large theming element

Queue line under contruction next to the bottom turn around

The Flume turn around

The track, with the station building in the background

Working on the track

The top of the lift hill

Working underneath the top of the lift hill

Looking towards the theming structure

Station building in the background

The Welcoming: Be Chosen scare maze is open for Scarefest

The scare maze opens late afternoon, but is best experienced after dark

The Welcoming: Be Chosen is housed inside the Courtyard in Mutiny Bay 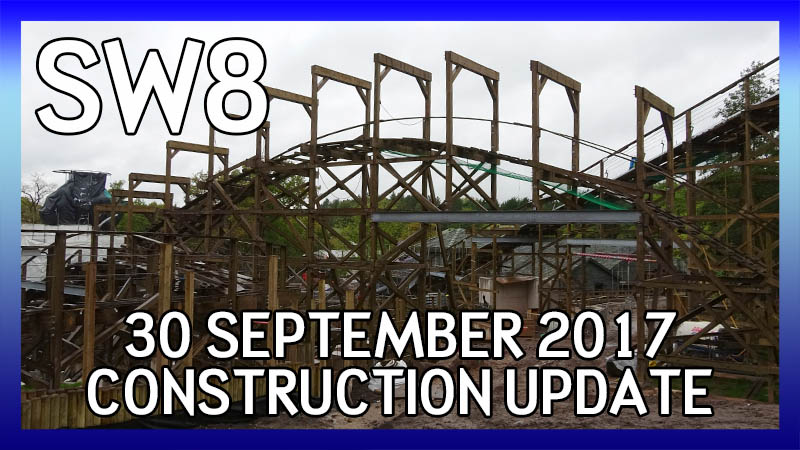 A huge amount of trackwork is now in place, and the ride's layout is clearly visible. Layers of wood are being built up, which will eventually be topped with the rollercoaster's metal running rails.

The station and maintenance buildings have been cladded in dark grey and are now partially obstructed from view by parts of the track. The major theming element has doubled in height and is has been covered over to hide whatever work is going on to it at this point, although there are some grey wooden-like spikes protruding from the top of the structure.

Across from the main construction site, The Welcoming: Be Chosen scare maze is being built within the Mutiny Bay Courtyard ready for Scarefest. The maze is somehow linked to SW8, possibly in a similar way that The Sanctuary maze related to The Smiler backstory at Scarefest in 2012.

Working at the top of the lift hill

Another view of the spiralling first drop

Looking down the site from next to the lift hill

Top part of the lift hill

Bottom part of the site

Top of the theming element

View from the Mutiny Bay side

Mysterious symbols have appeared on the fences

The Welcoming: Be Chosen under construction 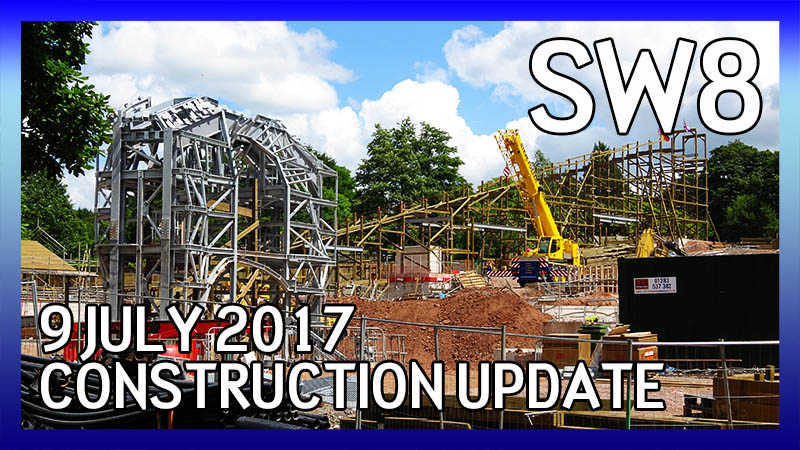 There have been massive changes on the site over the last four weeks. Most notably, the framework of the wooden lift hill now dominates the skyline. It was topped of on Friday, and has German, American and British flags flying from the top. This is clearly visible from several places around the park, including Mutiny Bay and the Congo River Rapids queueline.

A large metal structure has also been erected down on the lower half of the site, which many believe to be the bottom of a giant Wicker Man statue which the ride will eventually pass underneath. Indeed, the track sections under its "legs" are already being constructed. It will be interesting to see how much more of this gets built before an announcement/confirmation of the ride theme is made.

The station and maintenance buildings are also looking much more complete. These now both have the majority of their roofs in place.

Flags fly from the top of the lift hill

The lift hill towers over the site

The lift hill in profile

Looking down the site from the top

Base of the lift hill

Lower half of the site

The turn and 'Wicker Man' framework

Close-up of the 'Wicker Man' framework

Another close-up of the 'Wicker Man' framework

Metal framework with the lift hill in the background

View over the site from the Sky Ride

Another view from the Sky Ride 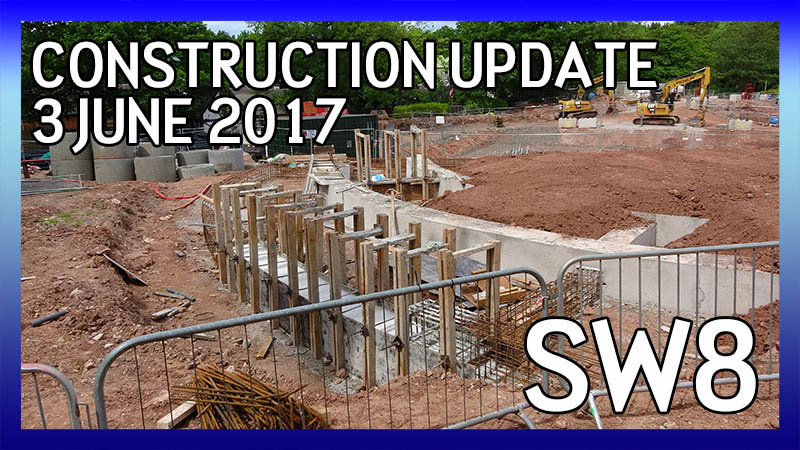 Construction on the SW8 site has been progressing nicely over the last month. It is now much clearer from looking at the site where certain sections of the track layout will be, and there is a preliminary scattering track supports visible.

However, the most obvious change is over at the station building. The framework for the building has gone vertical and the station, together with the maintenance building is starting to take shape.

Turnaround at the top of the lift hill

View from the top of the site

Supports emerging from the station

Station, with a show building in front - the train will pass through this to reach the bottom of the lift

Bottom of the site

A corner near the bottom of the site

Bottom half of the SW8 site 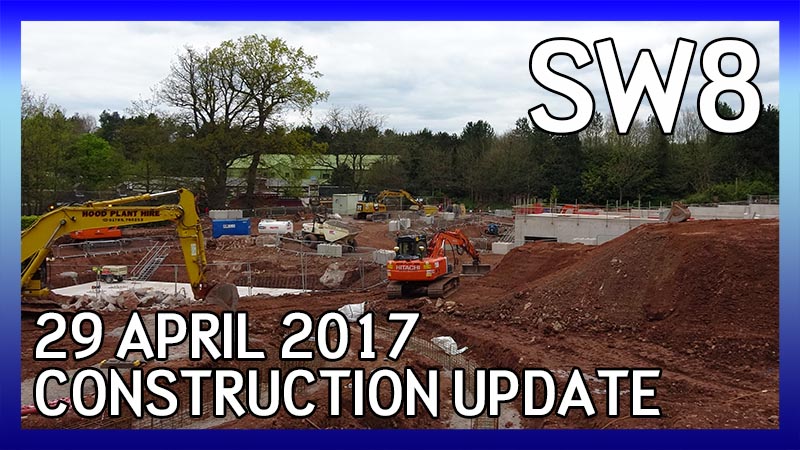 The former home of The Flume is now very much a building site. All that remains of the old log flume is the station building and some of the concrete supports in the surrounding woodland. Extensive groundworks have taken place, and construction of the new coaster's main building has started.

The usual path between Mutiny Bay and Katanga Canyon has been closed for the 2017 season to allow easy access to the site for construction traffic. In its place at a cost of £100k, the backstage path between the two areas, only usually open on Fireworks nights, has been opened with a short length of new path which skirts the southern side of the SW8 site.

Turnaround at the top of the lift hill

The top of the lift hill

Remains of The Flume in the surrounding woodland

Concrete supports from The Flume can still be seen

One of the old buildings near The Flume currently remains

The Mutiny Bay side of the construction site

The main station building under construction

Overview of the SW8 construction site